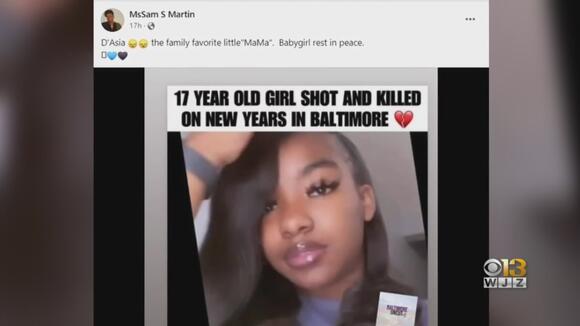 BALTIMORE — Police arrested a 26-year-old man for the murder of a 17-year-old girl in East Baltimore on New Year's Day.

Andre Bailey was charged with first-degree murder for the death of teenager D'Asia Garrison .

She was Baltimore's first homicide victim of 2023, happening just three hours into the new year.

Around 3:30 a.m. on New Year's Day, officers responded to a shooting in the 700 block of North Glover Street.

When they arrived, they found 17-year-old Garrison suffering from gunshot wounds. She was rushed to the hospital where she later died.

Police say around the same time, a 31-year-old man showed up at a local hospital with a non-life-threatening gunshot wound.

The day after the shooting, East Baltimore resident Donnell Garland said the gunfire damaged his family's home and their sense of safety.

"My oldest daughter was the one who was really affected because she's in the same age range," Garland said. "It really messed with her safety."

According to court documents, investigators recovered 31 9 mm cartridge cases, one live round, blood, clothing, pizza crust and a cigarette from the scene.

Police said later that week, a witness identified the shooter as 26-year-old Bailey.

Police arrested bailey last Friday in Harford County for the murder of Garrison and attempted murder of the 31-year-old man.