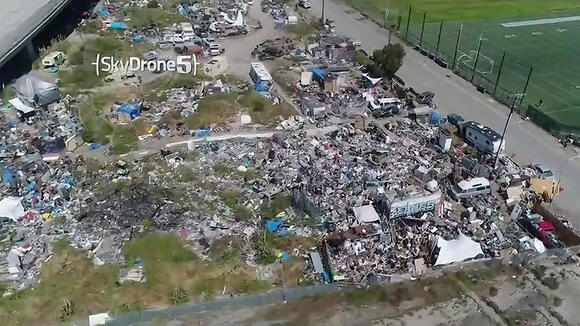 OAKLAND -- The biggest homeless encampment in Oakland will soon be shut down. Caltrans announced it is closing the entire Wood Street encampment due to safety concerns after multiple fires --  more than 100 --  at the site in recent years.

The most recent major fire at the encampment happened July 11. Another large fire on April 5 killed one person who was living in an RV.

Neighbors said a group is operating a chop shop in the encampment. They said the encampment hurts the neighborhood and endangers the people who live there.

Britton used to coach the McClymonds High School baseball team. A part of the encampment is located next to the field.

"A lot of the teams won't come here because of the homeless issues. Would I want to leave my kid here? No, I don't think so,"  Britton said.

Caltrans said it will close the encampment in phases starting Wednesday. They hope to shut it down completely by early August.

The Wood Street encampment stretches roughly a mile in West Oakland. Caltrans said around 200 people live there. Caltrans owns most of the property but a railroad company and the city of Oakland also own a portion of the land where the encampment sits.

Caltrans said they are working with the city and county to offer shelter beds. The city of Oakland also plans to build a 100-bed cabin village for the homeless at the encampment site once it has been cleaned up.