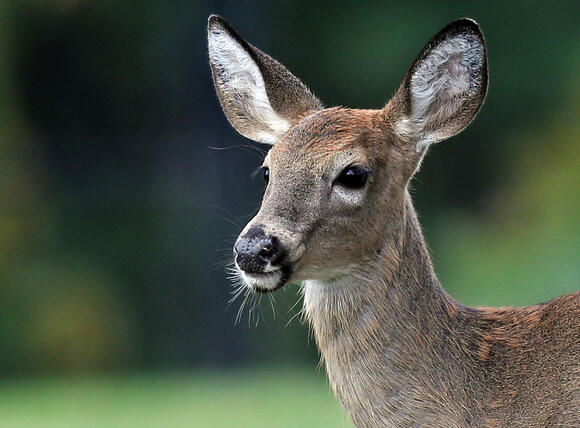 PITTSBURGH (KDKA) - Deer have taken over Pittsburgh's major parks and, having eaten their fill, are now roaming city streets and people's yards in search of gardens to browse.

Take a walk along the Bridle Trails of Schenley Park and you'll likely see lots of deer -- fawns and even six- and eight-point bucks moving through the woods. No one knows how many deer there are in Schenley. Estimates now range between 80 and 150. They're all doing what they do best: eating.

"There will be no trees," said naturalist Kate St. John.

St. John says the voracious browsers have eaten just about all of the native vegetation in the park, including the new trees vital to its future.

"During the winter they browse all the twigs. So, this would be a bitternut hickory tree someday but it's not going to make it because they keep eating it. It's going to be like bonsai," said St. John.

Just about all that's left in Schenley are invasive plants like saltgrass and grapevines, which prevent anything else from growing. St. John says we're at a crossroads and the future of the city's parks and the deer themselves lies in the balance.

"I don't know how long it will take for them to eat this to the point that there is nothing for them to eat, but that day will come, and they will either die or leave or both," St. John said.

It's already happening. Having eaten just about all there is to eat in Schenley, the deer have fanned out through the surrounding neighborhoods and can sometimes be seen in broad daylight roaming the streets in harm's way.

"We get a lot of kill from cars that run into them and then they get left on the side of the road until the city comes and picks them up, which is pretty disgusting," said Cookie Elbrling from Squirrel Hill.

But more often than not, they come out at night and wander into backyards to browse on people's gardens and bushes. Michael Dietrich in Squirrel Hill created an enclosure just to have some flowers.

"We wake up every morning and they're sleeping in the backyard. Then we know they're no longer happy living just in Schenley Park," Dietrich said.

With no natural predators and no public will to control it, the deer population has gone unchecked for decades. Pitt professor Walter Carson, who has studied them for all that time, says the damage to Schenley and other parks like Riverview and Frick will be irreversible unless bold action is taken soon, but he believes the public doesn't have the appetite to take it.

"You're going to have to kill a lot of deer and the only way to do that is probably to bring in hired guns to come in, with sharpshooters who don't give the deer a fair chance and they'll remove a lot," Carson said.

Sheehan: "There would be a lot of public opposition."

Carson: "A lot of opposition. It wouldn't surprise me if people were out with placards and signs: 'Stop the killing. Killing is never a solution to anything.'"

Right now, it's illegal to hunt in the city's parks and the city would have to apply to the Game Commission for an exemption and a permit. But all of that would also have the focus of an intense public debate that hasn't yet begun.