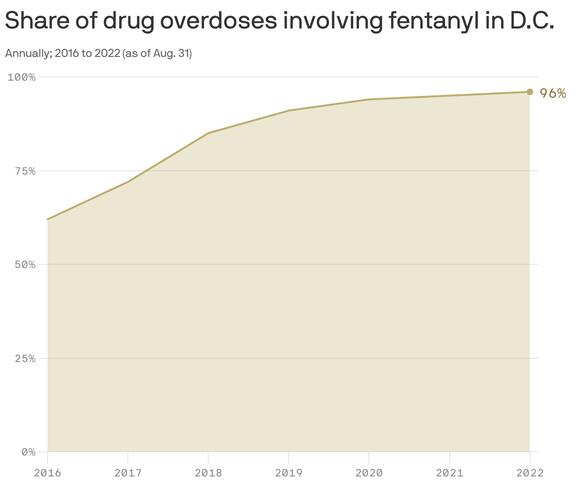 Fentanyl was involved in nearly every fatal overdose in D.C. last year through August 31.

Why it matters: Black and senior residents have disproportionately been impacted by the opioid epidemic in D.C.

Drugs that users may think are heroin, oxycodone or cocaine are being laced with fentanyl, says Shane Sullivan, a harm reduction expert with the non-profit HIPS.

By the numbers: In 2017, fentanyl was involved in 72% of overdoses in D.C. In 2022, that number rose to 96%, according to January-August data from D.C.’s Office of the Chief Medical Examiner.

Zoom in: Black Washingtonians accounted for a majority (84%) of the opioid deaths since 2017.

Seniors have been hit hard as well. Around twice as many people between the ages of 50 and 69 have died of an opioid overdose since 2017, compared to people ages 30-49.

State of play: D.C. officials have expanded access to the overdose-reversing drug naloxone in pharmacies across the city in recent years. All Metro Transit Police now carry the drug.

Yes, but: Some experts say D.C. needs to go further by creating 24/7 centers where people can use their own drugs safely, or a drop-in center where people can pick up free testing strips and naloxone.

Sullivan tells Axios that creating a safe space where people feel comfortable using opioids and other drugs with health professionals on hand to intervene would help decrease overdose deaths and stigma around seeking help for substance-use disorder.

What we're watching: D.C. aims to open a center next month in NoMa where people can sober up and also receive information on treatment options.

What to know: D.C. residents can text 888-811 to find a location to get free naloxone or fentanyl testing strips.

This article was written with the support of a journalism fellowship from The Gerontological Society of America, The Journalists Network on Generations, and The Silver Century Foundation.